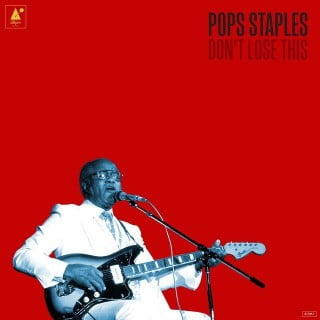 The anticipated posthumous recording by the influential singer-guitarist and social activist Pops Staples entitled Don’t Lose This is available now.

The record, which was originally recorded and produced by Pops and daughter Mavis Staples in 1999, now boasts new production as well as bass and guitar by Wilco’s Jeff Tweedy, and drums by Spencer Tweedy. Jeff previously collaborated with Mavis on her solo releases, One True Vine and the Grammy-winning You Are Not Alone. The album takes its title from the instruction Pops gave to Mavis as the two listened to the unfinished recording before his death: “Don’t lose this.”

The Chicago Tribune writes “Pops Staples was a musical visionary who played “gospel in a blues key,” as Duke Ellington once told him. His treble-soaked guitar is instantly recognizable as it appears to rise out of the Mississippi mist…” The NY Daily News adds, “the album’s triumph comes in highlighting both the plaintive quality in Pop’s voice and the wily, sexy, stalwart flick of his guitar.” The New York Times says of the record, “It’s done right: lean, un-slick and focused on Pops’s vividly recorded guitar and determined voice, still finding the unexpected pause and turn.”