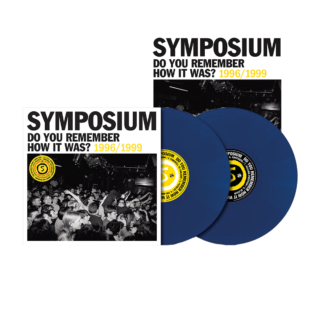 Symposium, the band heralded as ‘the best live band in Britain’ by Melody Maker in the 90’s, release a Best Of compilation. The five-piece group, consisting of Ross Cummins, Hagop Tchaparian, Joe Birch, William McGonagle, and Wojtek Godzisz, were formed in London in 1994 when the group were in their teens.  They soon garnered a reputation as a stalwart band of the era at a young age, supporting the likes of the Metallica, Foo Fighters, No Doubt, Deftones, and the Red Hot Chili Peppers; the last of which, they supported at Wembley Arena. Their first show after being signed, they performed to the sold out arena crowd two days after they had played at 70-person capacity Dublin Castle.  Symposium’s achievements in just six years of being a band read like a 90’s rock‘n’roll-call; supported by the likes of John Peel, Jo Whiley, and Steve Lamacq on BBC Radio 1, heralded by music mags such as Melody Maker, Kerrang! and NME, and performing on TV shows such as TFI Friday and Top of the Pops.  During their appearance on Top of the Pops in 1997 performing ‘Fairweather Friend’ completely live, frontman Ross became the only singer in the show’s history to stage dive, and the band received only the third ever stage invasion from the audience after Nirvana and Oasis.

4. The Answer To Why I Hate You