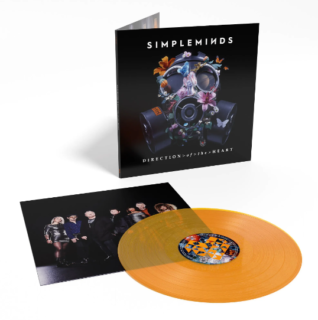 Direction Of The Heart

Most of Direction Of The Heart’s tracks were written, created and demoed in Sicily, where both Jim Kerr and guitarist Charlie Burchill live. Unable to come to the UK because of quarantine rules, the album was recorded at Hamburg’s Chameleon Studios. Here they produced the album, later enlisting Andy Wright (Massive Attack, Echo & The Bunnymen) and Gavin Goldberg (Simply Red, KT Tunstall) for additional production.

Band members, bassist Ged Grimes (who co-wrote two of the new songs, ‘First You Jump’ and ‘Solstice Kiss’), drummer Cherisse Osei and vocalist Sarah Brown joined them on some of the tracks, recording their parts separately in London.

All of this disparate work is belied by an album which sounds like a cohesive record – one of the most exciting and invigorating of Simple Minds career to date.

“How to make a feel-good ‘Electro-rock’ record, during the very worst of times? Direction Of The Heart is the result of that challenge. Who would have thought we’d have so much fun creating it?” – Jim Kerr

9. The Walls Came Down