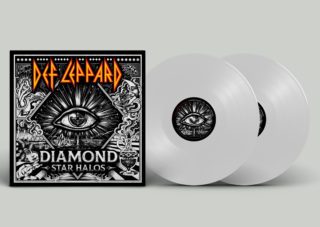 Diamond Star Halos is the brand new album from Def Leppard, their first since their chart topping self-titled Def Leppard record in 2015. Written by the band over the past two years it features 15 tracks including the anthemic, stadium-ready singles “Kick” and “Fire It Up”, with guest vocals from Alison Krauss on “This Guitar” and “Lifeless”.  The album title references T. Rex’s “Bang a Gong (Get It On)” with nods to T.Rex, David Bowie and Mott The Hoople across the album, which mixes the sound of their classic spirit with modern fire.  The limited edition 2LP clear vinyl is exclusive to Indie retailers and D2C, featuring a full colour cover and packaged in a gatefold sleeve.

It has been produced by long-time partner Ronan McHugh with the band and will be available on numerous formats – including a 2-LP picture disc version presented in a die cut sleeve and featuring the cover.

For Def Leppard’s forthcoming album, ‘Diamond Star Halos’, we are looking to start a worldwide global campaign set to launch with the band in the UK for the first time since 1981. The impending album is a nod to the band’s musical lineage, and we aim to cement the band’s British heritage. With this in mind, we will be implementing key activations that work globally with a distinctively British feel, across various elements of our campaign.

‘Diamond Star Halos’ will be released on May 27th 2022, which is 3 weeks ahead of Def Leppard’s tour in America. This tour is on point to be their second biggest grossing tour, with over a 1million+ tickets already sold. We want to capitalise on this resurgence and will be aiming for a #1 album within the UK, as well as high global chart entries worldwide. The album will be preceded by two lead singles and the band will be available for long lead promo.

Def Leppard are icons in the UK and we want to ensure that this is translated across the world, whilst continuing to build on the band’s behemoth status in America. Expanding the band’s fan base is one of our key aims, as we look to make Def Leppard generational in their output by looking at activation ideas and platform partnering that will continue to cement their place in history.