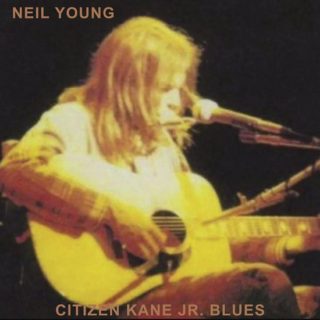 Citizen Kane Jr. Blues (Live at The Bottom Line), from New York City 1974 is a surprise set.
“In my mind it’s a hazy memory,” Young wrote on the Neil Young Archives, where he announced the release, “but this moment really captures the essence of where I was in 1974. Two months later, the album On the Beach was released, including songs I played that night — ‘Ambulance Blues,’ ‘Revolution Blues,’ ‘On the Beach’ and ‘Motion Blues.’”
Young stunned fans at the Bottom Line by taking the stage at 2:15 am following sets by Ry Cooder and Leon Redbone. “Folks at the Bottom Line heard seven new songs for the first time,” Young writes. “I just remember that I was 24 years old, bare, and letting it all out.” [He was actually 28.]
The set featured “Pushed It Over the End,” a song inspired by the Patti Hearst kidnapping that he was then calling “Citizen Kane Jr Blues,” along with the live premieres of “Long May You Run,” “On the Beach,” “Motion Pictures,” and “Pardon My Heart.” To this day, it remains the sole live performance of “Motion Pictures.”

If no tape exists, the original bootleg has been restored and remastered to bring listeners the best audio experience possible – Citizen Kane Jr. Blues (Live at The Bottom Line), from New York City 1974. The original bootleg artwork has also been replicated wherever possible, lending each release that treasured collector’s vibe and conjuring the era they were first created in.

1. Pushed It Over The End
2. Long May You Run
3. Greensleeves
4. Ambulance Blues
5. Helpless
6. Revolution Blues
7. On The Beach
8. Roll Another Number (For The Road)
9. Motion Pictures
10. Pardon My Heart
11. Dance Dance Dance