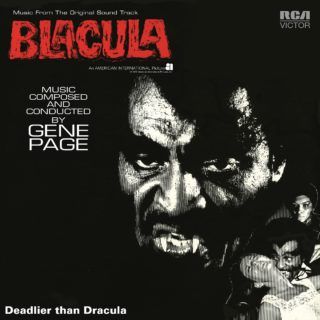 4 There He Is Again

1 Good To The Last Drop

3 What The World Knows

Blacula is a 1972 American blaxploitation horror film and was directed by William Crain. The movie stars William Marshall in the title role about an 18th-century African prince named Mamuwalde, who is turned into a vampire (and later locked in a coffin) by Count Dracula in the Count’s castle in Transylvania after Dracula refused to help Mamuwalde suppress the slave trade.

Two centuries later, in the year 1972, two interior decorators from modern-day Los Angeles California travel to Castle Dracula in Transylvania and unknowingly purchase the now-undead Mamuwalde’s coffin. Later unlocking the coffin, the decorators release Mamuwalde, becoming his first two victims as a vampire, turning them and others he encounters in his bloodthirsty reign of terror into vampires like himself.

The music for Blacula is unlike that of most horror films as it uses rhythm and blues as opposed to haunting classical music. The film’s soundtrack features a score by Gene Page, who worked closely with Whitney Houston, Jefferson Starship, The Righteous Brothers, The Supremes, The Four Tops, Buffalo Springfield and many more. The soundtrack includes contributions by the Hues Corporation, famous for their hit “Rock The Boat” and 21st Century Ltd.

We celebrate 45 years of Blacula-terror by releasing a limited run of 1.500 numbered copies on transparent, bloody, red vinyl.