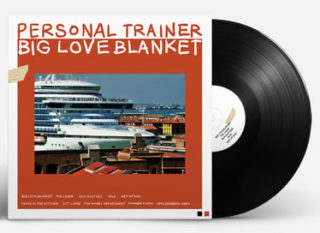 Most bands should be familiar with the honeymoon phase, those lofty formative stages where creativity blooms as the purest of fruits. The fingers itch, the eyes wander off to rapturous highs, the body trembles electric with creative energy waiting to be unleashed upon unsuspecting onlookers. Unfortunately, the honeymoon phase is usually just that: a phase. After each landmark or hurdle you clear, things tend to get more and more convoluted. Those impulsive why nots can sour into routines and procrastinations between.

Thank heavens, nobody told Personal Trainer this was all supposed to be temporary. The Amsterdam-based collective seek out sharp-witted ways to prolong the innate joy of being a band just plugging in and playing. Willem Smit, the group’s conductor and cheerleader, started the band as an ultimate love letter to the vibrant scene he himself inhabits. Initially, it meant playing shows in impromptu line-ups, with individuals of varying skill levels, interests and sensibilities. At the hub of this volatile energy, Smit embraced his role as jester in court, performing his own songs like a lost tourist on a karaoke bender.

This enthusiasm was reciprocal, as bands ranging from Pip Blom, Bull, Home Counties, The Klittens to Global Charming – as well as Smit’s other outfits Canshaker Pi, whose debut album was produced by Stephen Malkmus while the band were just teenagers, and Steve French – frequently rubbed elbows on stage. Personal Trainer shows became rousing rituals, with songs that more-or-less sounded like all your favourite indie rock luminaries jam-packed into big-beaming pop psalms. The delirium of playing “The Lazer” for the umpteenth time would perpetually elevate to religious fervour.

So, with the band now established as far more than a musical holiday romance, the ten tracks of their debut album “Big Love Blanket” have arrived fully-formed, displaying a playful, almost hyperactive diversity of sounds and influences, landing on one all of their own that has been championed as “rapturously fun” by Ones To Watch, “incredibly catchy indie-led pop” by Record Of The Day, “curious and endearing” by Steve Lamacq, “remarkable” by CLASH and even compared to LCD Soundsystem by BBC 6 Music’s Marc Riley.

“Big Love Blanket” is aptly titled, a record steeped in the love of making and performing music with your friends. At a still young age Willem is already a strong candidate for the term “indie lifer”, having achieved cult status as a songwriter already in the Netherlands, and the 10 songs here, euphoric and thoughtful in equal measure, tell the tale of that life so far.

Wrap yourself up in these songs, curl up in their blanket: Personal Trainer are here to stay.