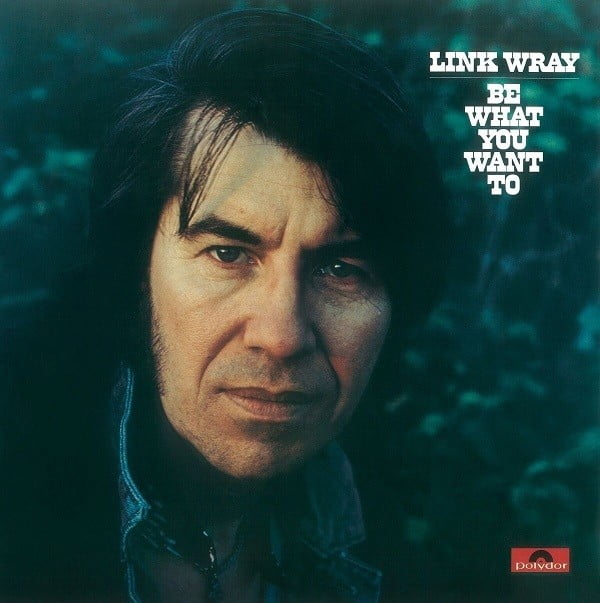 Be What You Want To Lp

Tidal Waves Music proudly presents, Fred Lincoln ‘ Link’ Wray, Jr. (1929-2005) born of Shawnee Native American parents was an American rock and roll guitarist, songwriter and vocalist who became popular in the late1950s. Though he began in country music, his musical style went on to consist primarily of rock and roll, rockabilly and instrumental rock.

Building on the distorted electric guitar sound of early records, his 1958 instrumental hit “Rumble” (banned in New York and Boston for fear it would incite teenage gang violence) popularized “the power chord” which laid the foundation to modern rock music. Link’ s previous releases had proven the man’s versatility with influences coming from many different genres including R&B, country, blues, and, of course, rock. ‘ Be What You Want To’ continues this trend: a thick stew of boogie-rock, country-funk and Americana with lots of soul.

Wray employed a huge number of musicians to play on ‘ Be What You Want To’ , including Grateful Dead guitarist Jerry Garcia, Thomas Jefferson Kaye & Cmmander Cody. Of course, the main part of the talent comes from Link Wray himself. His amazing ability as lyricist, songwriter, and musician is noticeably brought to the fore on this album.

Link Wray leaves a legacy as big as his career: Rolling Stone placed Wray at No. 45 of the 100 greatest guitarists of all time and in 2013 he was a nominee for the Rock and Roll Hall of Fame. Pete Townshend of The Who once said, “If it hadn’t been for Link Wray and ‘Rumble,’ I never would have picked up a guitar.” Other musicians citing him as a major influence are Iggy Pop, Neil Young & Jimmy Page (amongst others).

Originally released on Polydor, this is the first time the album gets the vinyl treatment since 1973. Now available as a gorgeously packaged deluxe vinyl edition, exclusively for Record Store Day 2017. Strictly limited to 2500 copies

His amazing ability as lyricist, songwriter, and musician is noticeably brought to the fore on this album. ‘Be What You Want To’ is consistently enjoyable to listen to and always impressive musically. The man’s growling vocals and rocking guitar will undoubtedly enthrall many first-time listeners and also keep longtime fans happy. – ALLMUSIC

The annals of rock & roll are littered with various and sundry odes to ‘doing yer own thang’. This here is Link Wray’s take. All open-road and windows rolled wayyy the fuck down. Tracked in San Francisco with a host of the local musical zeitgeist lending a hand (Thomas Jefferson Kaye, Jerry Garcia, Commander Cody) it’s very much post gunslinger Wray —a thick stew of boogie rock, country funk and soul. Highway Americana! – Aquarium Drunkard