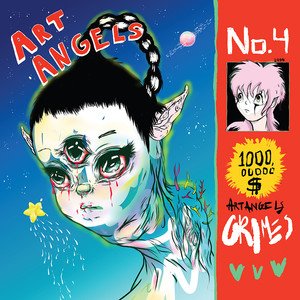 Art Angels is the fourth studio album by Canadian singer and songwriter Claire Boucher, released digitally under the pseudonym Grimes on November 6, 2015 via 4AD and in physical formats on December 11 the same year. Boucher began planning the record in 2013 as the follow-up to her third studio album Visions, however she scrapped most of the material from these sessions and began a new set of recordings in 2014. The track “REALiTi”, which came from the earlier recordings, was released as a demo in early 2015. After the demo received critical praise Boucher decided to include an alternate version of the song in the final release.

Art Angels has been described as being more accessible than Grimes’ previous albums while retaining her experimental influences. The album features guest vocals from Taiwanese rapper Aristophanes and American recording artist Janelle Monáe. Two singles, “Flesh without Blood” and “SCREAM”, were released ahead of the album and a single music video was made for the tracks “Flesh without Blood” and “Life in the Vivid Dream”. Art Angels sold 11,000 copies in the first week of its release and became Boucher’s highest charting album at the time. The album was released to widespread critical acclaim and was ranked by several publications as one of the best albums of 2015.