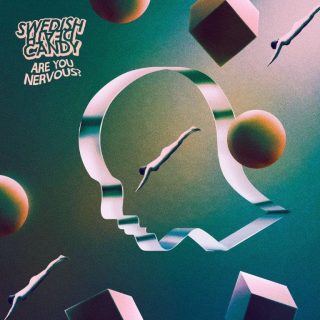 London-based international acid rockers SWEDISH DEATH CANDY are delighted to announce that their second album, Are You Nervous?, will be released later this year on 27th September 2019 via Hassle Records. “Environmental issues, technological advances…it feels like we’re on the brink of massive change,” says frontman Louis Perry of the new record, ”so Are You Nervous? felt like an appropriate title…”

Alongside the album, the quartet are also pleased to announce a huge run of live appearances including extensive EU tour dates and festival appearances, and a November 2019 run of UK headline tour dates, including their biggest London headline show to date at The Moth Club on 13th November.

To celebrate the news, the band have released lead single ‘Modern Child’—a track about an orphaned child born in the future to robot carers, that weaves Perry’s disparate interests together perfectly, illustrating how taking a creative approach to storytelling on the new record allowed him to examine topics from multiple perspectives.

“I’m a sci-fi fan,” says Perry, “and for me the best science fiction is generally a social commentary based in a futuristic universe. I feel like we’re living in that time. We aren’t far from the future that a lot of the classic sci-fi novels refer to. This story doesn’t feel that far fetched considering how large of an effect technology has on the youth of today,” Perry continues to reason. “My six year old sister can use computers and tablets like it’s second nature. The internet has had a huge influence on our upbringing, and even I can’t imagine what a modern child’s perception of technology is, considering that they’ve never lived without it.”

Recorded with Tobin Jones and assistant engineer Lucas Mendez at The Park Studios in Wembley, Are You Nervous? is a deeper delve into the band’s sprawling cultural influences than they’ve ever committed to tape before. Whilst retaining their core psych-sound, there’s a heaviness to SDC that seems latent within the band; gut-twisting, rolling riffs, dripping in distortion, ooze naturally from their skin like psychoactive substances from a toxic frog.

‘A Date With Caligula’/’Green’—SDC’s previous stand-alone 7” single released earlier this year—picked up praise from the likes of Louder Sound, Planet Rock Radio, and Kerrang! Global Creative Director/MOJO contributing editor Phil Alexander. Rounding out the end of last year with three exhaustive months of European touring, SDC kicked off 2019 on a short stretch of dates with Dutch psych rockers DeWolff, and an extensive run of dates supporting Nashville rock band All Them Witches, with appearances at Raw Power Festival, Sonic Whip Festival, DesertFest Berlin, and more.