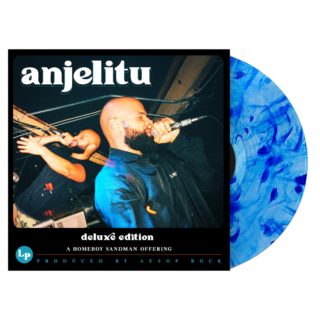 Homeboy Sandman announces the deluxe edition for his 2021’s Anjelitu due out July 29th on Mello Music Group. Sand reunites with his Lice affiliate to revitalize the acclaimed project with two bonus tracks along with the Aesop Rock-produced instrumentals.

On Anjelitu, Homeboy Sandman demonstrates his virtuosic lyrical ability with Aesop Rock behind the boards. The derivation of the title is a combination of Sand’s real name, Angel, and taijitu. He explains, “My mother, and lots of my relatives, used to call me “Angelito.” Little Angel. The taijitu is the symbol for yin and yang. Opposites that make a whole. Given the dualistic/duelistic nature of the songs on the record, put it all together and what do you get, Anjelitu.”

Receiving critical praise from Bandcamp, Stereogum, OkayPlayer, PopMatters, and more, Anjelitu showcases Homeboy Sandman and Aesop Rock’s undeniable chemistry. The duo who also collaborate under the pseudonym Lice have connected for numerous projects dating back to 2015. “Lice has long since calibrated the symbiosis spans states,” Homeboy Sandman declares. The most recent Lice collab “Ask Anyone,” a tribute to the late MF Doom, was included in VIBE’s top 5 most underrated songs of 2021.