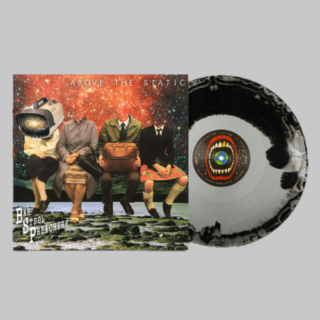 The new album from the Brighton-based punk-rockers The Bar Stool Preachers!

The twelve songs that make up The Bar Stool Preachers’ stunning third full-length, Above The Static, were only supposed to be ideas, a guide to what the actual album would and could later become. So in April 2021, together with producer Ben Hannah, the Brighton-based band set up camp at The Waterloo, a three-story pub/venue in the Northern seaside town of Blackpool, to begin the process that would lead to the process of making an album. But when they listened to ‘Flatlined’, the first song they committed to tape there, it dawned on them that it actually sounded like the finished product.

“We went in there with the idea of getting demos” says frontman Tom McFaull. “We took a recording desk and everything we could fit in the car with us because we wanted to mess around and dial in a sound. But as soon as we recorded that first song, Ben and I just looked at each other and went ‘This sounds massive enough to be the real thing.’ We were there for about two-and-a-half weeks in total. The pub was closed because of Covid, so it was just us and Fletch (the owner). We’d go to bed for a few hours, wake up, the first person up would put the coffee on and press play on whatever we’d recorded the night before. We just lived it fully. We couldn’t re-record this album if we tried.”