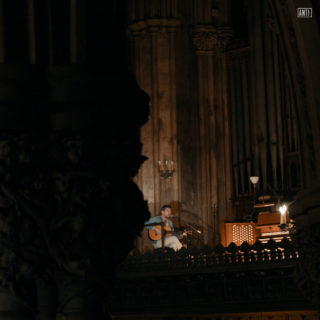 Now being released for the first time on vinyl, CD and digital formats, ‘A Very Lonely Solstice’ captures a poignant moment in time. The recording was originally broadcasted as a live-stream event on the winter solstice of 2020, just days after New York declared a state of emergency tightening restrictions again in response to increasing COVID-19 cases. Pecknold describes the set as “me by myself on the longest night of the year… honoring the loneliness of 2020 with a nylon string and some songs new and old.” Fans worldwide tuned in while quarantined at home, finding solace and a sense of community in a period of extreme isolation.

Much of ‘A Very Lonely Solstice’ showcases a solo focus on Pecknold who offers up acoustic arrangements of fan-favorite songs spanning Fleet Foxes’ catalog. Selections cover all four of the band’s studio albums, including their 2008 selftitled debut album (“Tiger Mountain Peasant Song”) to 2011’s Helplessness Blues (“Blue Spotted Tail”) and 2017’s Crack-Up (“If You Need To, Keep Time On Me”), all the way to their latest release, Shore. Resistance Revival Chorus joins Pecknold on Shore tracks “Wading In Waist-High Water” and “Can I Believe You.”

Also featured: a cover of Nina Simone’s “In The Morning” and a rearrangement of the traditional “Silver Dagger.”