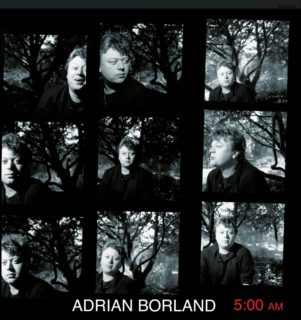 ‘5:00 AM’ was the moment Adrian Borland reached the point where he felt at ease as a solo artist. This desire was reflected in the Play it Again Sam solo albums where there was a concerted effort to move away from the claustrophobic atmosphere pervading late period Sound. The journey continued via the low key ‘Beautiful Ammunition’ then back to band status with ‘Lovefield’, after which ‘Cinematic’ came close to dancing along the edge of conflicting moods but it was with ‘5:00 AM’ that Adrian appeared finally comfortable to invoke echoes of ‘the Sound’ while at the same time adding a contemporary touch that moved his music firmly out of the band’s formidable shadow. 5:00 AM turnes out to be a track by track classic.

Standing  somewhere close to the anthemic beauty of ‘Shock of Daylight’, there was also a common thread between the two records with much-loved late Cardiac Tim Smith returning, this time to co-produce with Adrian. They certainly managed to capture the essence of Adrian’s heart on sleeve romanticism, one listen to the supercharged energy rush of Stray Bullets leaves you in little doubt that the righteous fire was burning brightly.