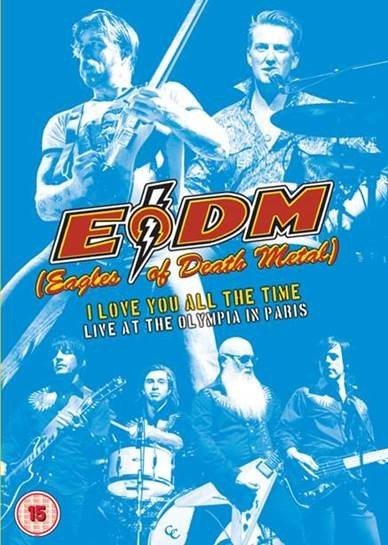 On August 4, 2017, Eagle Rock Entertainment will release I Love You All the Time – Live at  The Olympia in Paris by Eagles of Death Metal on DVD, Blu-ray, 2CD and digital video / audio. This emotionally charged concert performance includes the tracks “Complexity”, “Don’t Speak (I Came To Make A Bang), “Cherry Cola”, Duran Duran cover “Save A Prayer”, “I Want You So Hard (Boy’s Bad News)” and many more.

During Eagles of Death Metal’s November 13, 2015 concert at the Bataclan Theatre in Paris, gunmen entered the venue and opened fire on the crowd, leaving 89 dead. On February 16, 2016, the band returned to Paris to complete their show as part of The Nos Amis Tour¸ performing at the Olympia Hall. This release encapsulates the pure emotion and intensity of that extraordinary Olympia concert and is dedicated to all those who lost their lives at the Bataclan.

Before the show, Eagles of Death Metal co-founder and lead singer Jesse Hughes said: “The people of Paris have always been incredible to us, and our feeling of love towards this beautiful city and its people has been reinforced a million times over this past month. Hearing the stories of the survivors, the injured and those who have lost loved ones has been overwhelming. Not returning to finish our set was never an option.”